FREE SHIPPING ON ORDERS OVER $50

Be the first to review this product
$26.67
QTY: 0 Available
Add to Wish List
Skip to the end of the images gallery 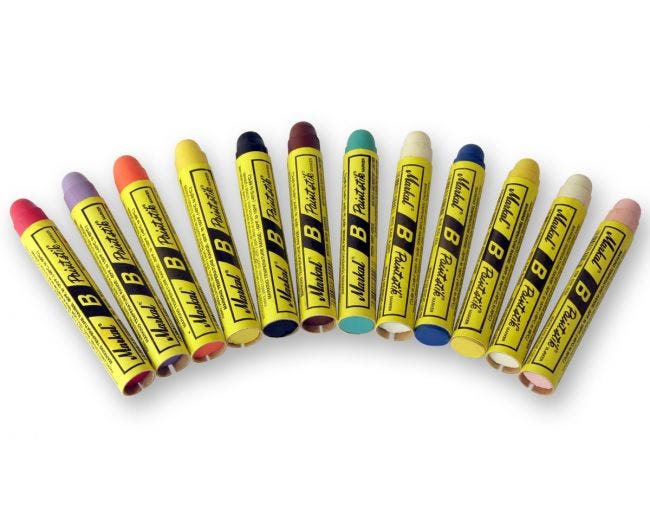 Skip to the beginning of the images gallery
Product Description
Includes one box of Markal paint crayons.
Includes the following colors:
One stick of: black, blue, brown, purple, pink, orange, red, and green
Two sticks of: white and yellow

These were used to mark on the engine, body, and chassis as the cars went down the assembly line.
Markal paint sticks were used to write on the body, engine and chassis at the factory.
Examples: A typical Mustang or Ford car was painted with the fenders and hood off of the vehicle. The location of the paint racks containing these items was written on the outside of the fender aprons. The rear axle assembly had an identification number written on the pumpkin usually with an orange marker. Some markings are eventually painted over and are only visible as raised lines under the paint.
Paint sticks were not used to apply stripes to springs, driveshafts etc. these markings were applied using a liquid paint.
Make your car stand out from the rest by using these Markal paint sticks on your concours restoration.
May also be used for art projects !
More Information
Reviews
Write Your Own Review